Turtles All The Way Down By John Green (Non spoiler review) 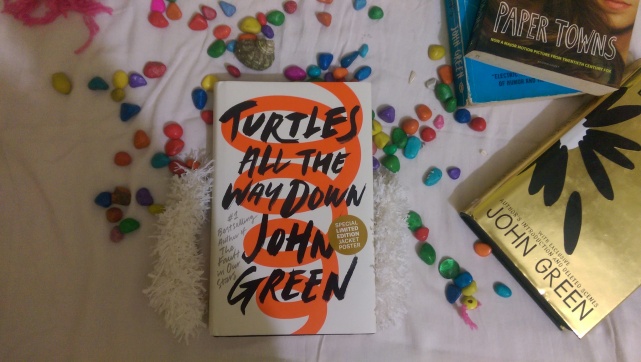 I was scared. Like actually terrified of reading John Green’s new book. Because here’s the deal ; I love John Green, as a writer, as a vlogger and as a person. My experience with his other works have been nice but I did feel that all of his books were kind of repetitive and unrealistic in a way that I couldn’t relate to. Yes, I liked the fault in our stars and looking for Alaska but they had their many drawbacks, including pretentious and cheesy characters with the slightly wrong portrayal of teenage hood. But I loved him nonetheless. And when I heard of his new book releasing I was beyond happy and tensed. I wanted to love it. I wanted it to be different. I wanted it to be real. And you know what? IT WAS. Maybe not too much. It did have two not-so-diverse main characters who were highly intellectual for someone in school, but it had a very different feel to it. Both the characters had depth to them. I loved the book, and without doubt, it’s the best of his works.

“Your now is not your forever”

Goodreads : Sixteen-year-old Aza never intended to pursue the mystery of fugitive billionaire Russell Pickett, but there’s a hundred-thousand-dollar reward at stake and her Best and Most Fearless Friend, Daisy, is eager to investigate. So together, they navigate the short distance and broad divides that separate them from Russell Pickett’s son, Davis.

Aza is trying. She is trying to be a good daughter, a good friend, a good student, and maybe even a good detective, while also living within the ever-tightening spiral of her own thoughts.

In his long-awaited return, John Green, the acclaimed, award-winning author of Looking for Alaska and The Fault in Our Stars, shares Aza’s story with shattering, unflinching clarity in this brilliant novel of love, resilience, and the power of lifelong friendship.

John Green does a terrific job of portraying Aza’s illness in a way that is not sugarcoated but is real and relatable even to someone who hasn’t personally been through OCD (Obsessive Compulsive Disorder) The tightening thought spiral, the not being able to control what you think and the heartbreaking realization that you don’t choose what happens to you or you might not be real is beautifully enveloped  by him in the book. It’s about how your mind won’t shut up, and how you can’t jump out of your skin when you just want yourself not to be you. And this all is written in such a way that I think most of us could be like ; Yes, I know that feeling.

“There’s no self to hate. It’s like, when I look into myself, there’s no actual me—just a bunch of thoughts and behaviors and circumstances. And a lot of them just don’t feel like they’re mine. They’re not things I want to think or do or whatever. And when I do look for the, like, Real Me, I never find it. It’s like those nesting dolls, you know? The ones that are hollow, and then when you open them up, there’s a smaller doll inside, and you keep opening hollow dolls until eventually you get to the smallest one, and it’s solid all the way through. But with me, I don’t think there is one that is solid. They just keep getting smaller.”

I loved how this book was too philosophical and brimming with sadness at the same time. I loved that mental illness does not magically gets cured over the course of one book, or that even if it does not get cured at all, life just goes on and you survive and learn to live with it. And that you will have to go through shit and many ups and downs but life will still be amazing. The book though sad, had a positive light to it. Nothing gets fixed, yet it remains.

Coming on to the romance. It was very different from what we usually get in YA books, speaking in the sense of the conclusions of it. And all I can say without giving out spoilers was that I liked it, and I liked how it didn’t focus on the romance too much and instead came out as a relationship where two people are just there for each other.To talk to and to be with in hard times. Also, the most interesting part of it was that it didn’t have any conclusion or an ending like most relationships do. It’s sort of left on your imagination. (I’m really trying not to give out spoilers, as you can clearly see)

I’ve always felt that even though stories in John Green’s book are not up to the mark but his writing always is. It’s always beautiful and there are some very amazingly written sentences in all of his books, especially in this one. The kind that after you’ve read it, you close the book for a while to take a moment to admire the beautiful lines you just read.

“You’re both the fire and the water that extinguishes it. You’re the narrator, the protagonist, and the sidekick. You’re the storyteller and the story told. You are somebody’s something, but you are also your you.”

It’s not a surprise for any of you that I don’t like non fiction books or anything that tries to teach me something. I read for pleasure and escapement. But well, another thing I ABSOLUTELY loved was how it kind of educated me on so many things. Like, It’s packed with random science facts, history of things , about astronomy and biology and it’s not even boring or irrelevant. It fits. And I think I came out of the book with more knowledge than I previously had. Also, SO MANY BEAUTIFUL QUOTES IN THIS BOOK. From Shakespeare to Emily Dickinson. I loved these little doses of literature.

Unfortunately, nothing is perfect. So I’d list out a few things that I wasn’t a fan of. (But these didn’t manage to make me dislike the book at all.)

(Yes, I loved it that much. Kudos to John Green. And kudos to me for not even acknowledging the fact that I’m posting after 5 months.)

Hello peeps. Have you read Turtles All The Way Down yet? Did you like it? Talk to me in the comments below. X

Hello there. You have reached Anushka's blog, a small corner of the internet where all sorts of good stories-fiction or non-fiction are celebrated, discussed, and loved. This also might act as a platform for the ramblings of a 19-year-old from time to time. Oh, and there is no such thing as too many books.