Book Review:Competing with the Star 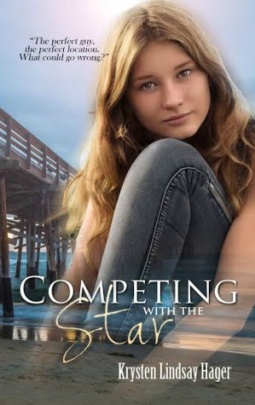 BLURB FROM GOODREADS:The perfect guy, the perfect location. What could go wrong?

Before the beginning of sophomore year of high school, Hadley and her family move to a beautiful beach town, where she makes amazing new friends and lands the boyfriend of her dreams—Nick Jenkins. He’s the kind of guy every girl swoons over, and it isn’t long until Hadley discovers some are still swooning.

After some time dating, Hadley and Nick form a deep bond. But insecurity sets in when Hadley discovers her boyfriend once had a huge crush on her friend—who just happens to be the beautiful former teen TV star, Simone Hendrickson.

The past is the past—or so they say…

Hadley confronts Nick, who confesses about his history with Simone. Though he claims to only have eyes for Hadley now, it’s hard to believe—especially when she’s blindsided with the news that Nick and Simone kissed after school.

Now Hadley must determine who is telling the truth. Love, betrayal, friendship…who needs soap opera drama when you’re busy competing with a star?

Hadley and her family move to a new town where Hadley makes some amazing friends and a boyfriend,Nick,who is popular and sweet.Everything is going on perfectly between them until Hadley finds out that Nick had a crush on her friend Simone,an ex TV star and he might still be into her.

*I hate the fact that the original blurb gives most of the story away!,there’s hardly anything left in the story that isn’t already written in the blurb.The blurbs shouldn’t be this informative.

The thing I liked most about this book was that it was so relatable.The book captures the problems we face in school and the different doubts we are in during our teenage years by a catchy and funny story.The story mainly focuses on romantic relationships but it also gives a sense of true and honest friendship and the importance of family.

Hadley’s character was vibrant and funny,I felt I’m like reading my own journal as the insecurities and confusions she deals with about right and wrong is something that most of the girls experience during their teen years,I know I do.

My heart shot up in my throat.I clicked a screenshot of that message in case my phone went on the fritz and I lost the moment forever.

Would it look desperate if I ran up up to him?Should I go over and hug him?Why wasn’t there an instructional booklet for this kind of thing?

Don’t we all take a screenshot whenever someone texts us something cute?And about that instructional booklet thing,even I hope there was one.

This book was full of school drama but the kind of which it is realistic.

I absolutely adored this book and the characters,It was an easy read and if you’re in a reading slump then this book will definitely get you out of it.

The story could have been longer and it could have focused a little more on other things and not just mainly on romantic relationships.

4 thoughts on “Book Review:Competing with the Star”

Hello there. You have reached Anushka's blog, a small corner of the internet where all sorts of good stories-fiction or non-fiction are celebrated, discussed, and loved. This also might act as a platform for the ramblings of a 19-year-old from time to time. Oh, and there is no such thing as too many books.